Hidden Lairs in Diablo Immortal  is a Mini-Dungeon feature. These dungeons can be randomly encountered around each of the zones while exploring the area. Unlike regular dungeons, their locations aren't set and are not locations to traveled to. These are entrance that will pop up in the zones and will not be avilable until you are notified that a Hidden Lair has opened up in the zone. Complete these Lairs to gain additional rewards. See Dungeons for other walkthroughs on other dungeons.

What are Hidden Lairs in Diablo Immortal?

Hidden Lairs are mini Dungeons that can be encountered throughout different locations and zones in Diablo Immortal. Because of their sporadic appearances, they are not dungeons that are deliberately sought for when clearing zones and quests, only once you are notified that a hidden lair has opened up should you go looking for the entrance. These appearances have no set pattern and Hidden Lairs randomly spawn. Be vigilant and quick once you are notified since these lairs are first come first serve and become unavailable once someone has entered.

Are Hidden Lair Entrances open for a Limited Time?

They are first come first serve. As soon as a lair is opened, players in the region may be notified and you or your party must enter the hidden lair first, otherwise it becomes unavailable and you will not be able to interact with the entrance. The entrance does not stay open for other parties or players to enter and participate in the dungeon.

Once you enter an Underground Lair entrance and enter the Hidden Lair Menu, it will give you the dungeon details. This will indicate the kind of dungeon it is, the Difficulty, Recommended Level, and Rewards. From this menu, you'll also be able to view your part if you have joined one, or Find a party if you are currently not in a party but wish to complete the Hidden Lair in a Party. 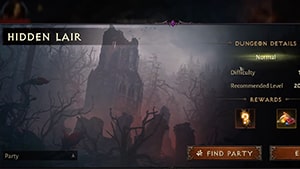 Once you start a lair, your objective should appear on the left hand side. The usual objective is to Kill the Lair Guardian.

Once you enter a lair, your goal is to clear the dungeon much like Elder Rifts and Challange Rifts and other dungeons. You objective will be located on the left side of the screen and you can expect to ultimately face the final boss, a Lair Guardian, which will be displayed as your main objective, along with other mob creatures. At the end of the rift there may be a chance to continue to descend through the next portal after completing the initial objective. You will still continue to gain rewards, however gaining Gem rewards will not be guaranteed.

How do I Play Co-Op or Find a Party?

From inside the Hidden lair menu, players will be able to view their current party or Find a Party to join them if they have entered the Hidden Lair already. Unlocking the Multiplayer or Co-Op feature in Diablo Immortal simply becomes available through story progressions, specifically after completing the tutorial section of the game. Once you defeat that boss, talk to Deckard Cain and you'll see shadows of other players that will spawn around you. From here, you can add your friends to your Friends List. Simply click on the menu at the top right of the screen and choose the Friends button. Here, you can add your friends by providing their BattleTag.

In some servers there are people looking for members who are also hunting for these Hidden Lairs. You can take a look at your Party Finder Tab to see if anyone has the intention of hunting down hidden lairs from their party description or title. If you've found a party you would like to join, hit apply to send in a request to join the party.

You can also create your own listing on party finder and set your preferences to "Hidden Liar" along with the level parameters you are looking for.

Where can you Find the Hidden lair?

Encountering these takes a little bit of luck and zone familiarity. Once you are notified that a Hidden Lair has opened in this zone, you now have to look for the entrance before other players come across it first. Once you are in range, these active entrances wil also appear in your minimap. The Hidden Lair Entrnace marker is marked in blue like the image below.

Other methods of quickly locating these entrances include playing through the zones in parties. As soon as you are notified, players of the party can spread out looking for the Lair entrance and regroup once someone has found it.

When exploring a zone, and wanting to familiarize yourself with the Lair entrances, look out for caves, ruins or stone structures that may look like a tunnel. These entrances are set locations in each zone. There may be 8-12 entrances per zone, but when a Hidden Lair is opened, only specific entrances will be active and will have a faint blue glow indicating it is open. You can also check for the blue marker on the minimap. Click on them to enter the Hidden Lair menu and participate in the mini-dungeon. Below is an example of an active Hidden Lair Entrance with a faint blue glow. See other examples of entrances in the gallery below. 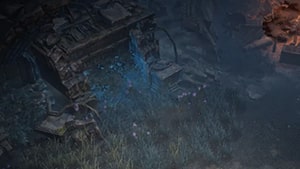 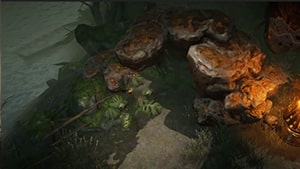 Tips for locating the Hidden Lair

Since only one player or one party may enter a hidden lair at a time, knowing how to locate and enter the entrance first is important to know

Players have a chance to receive Gold, Accesories and Gems as a reward for participating in these Hidden Lairs. Even receiving duplicates of the same Gem will allow you to eventually upgrade them, increasing their effects allowing you to enhance your kit. Complete the dungeon and the game will notify you of your success and leave you with loot to collect.

These Hidden Lairs Spawn and refresh every few hours so even if you miss the chance at finding one, you will be sure to have other chances to participate. 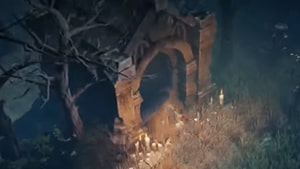 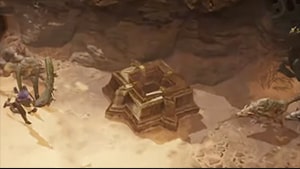