End Game In Diablo Immortal, after you have completed the main story and reached maximum levels, there are still plenty of activities you can participate in. You may play with or against other players in Rifts, or gain more EXP through different dungeons and bounties to unlock more Paragon Trees. At higher levels, players can also choose to partake in the Shadows and Immortals Faction actitivies and events since you will need a minimum level 43. Particpating in more challenges and events at higher difficulties will unlock plenty more exclusive events and things to do in order to grind and work for rare rewards, so you can craft your optimum Build.

What are some Notable features for Endgame?

When approaching endgame, you will be around level 50-60, with 60 being the current maximum level. You would by now if not already, finished the main campaign or story so you can focus on other features and farming. Take a look at the regular activities and features of Diablo Immortal to find out what you can do as you approach endgame regularly.

As you start completing quests and storylines, you will be able to run through the game and the dungeons on high hell levels, which will affect your rewards. One of the main endgame features is gaining access to Set Items. Players can also choose to modify the difficulty in order to challenge themselves. This increases the strengths of the enemies and bosses you face as well. You can go up to Hell 4 difficulty, but may need to level up before you get there. The skull icon on your map menu is where you can modify your difficulty.

Set Items are the best endgame accessory items in game that add on additional effects the more items of the same set are collected and equipped. They are most associated as end game items since they are accessed once a character reaches the max character level and unlocks Hell 1 difficulty. They are usually accompanied by a set bonus which increases according to how many items of the same set are equipped. Each Set fills the secondary gear slot and will contain one of each slot, except for rings. There are usually two rings included in a set. These are added on a s 2 set bonuses, 4 set bonuses, and 6 set bonuses, containing the most benefits and added effects. 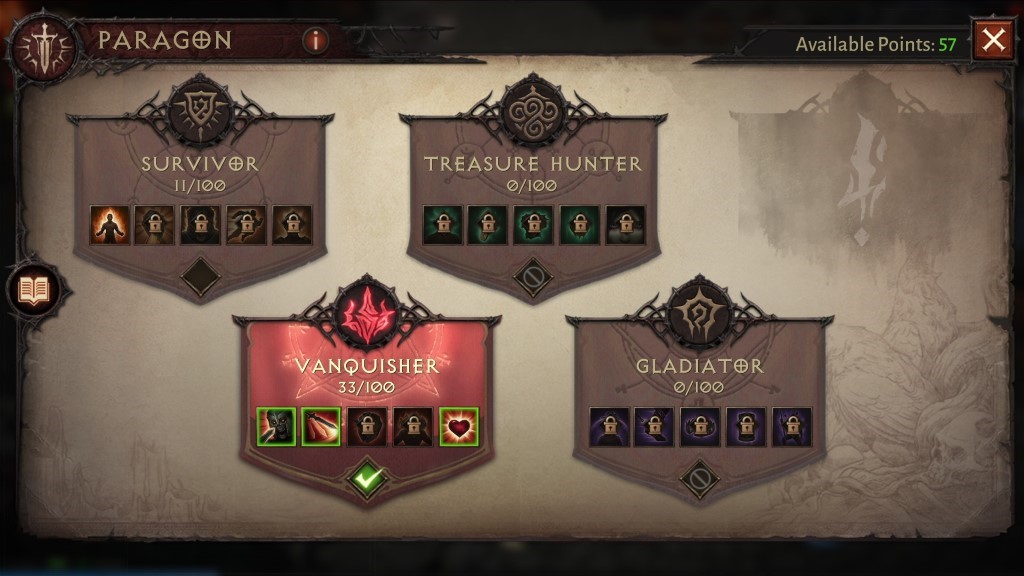 Once players reach endgame, they can start to focus on gaining exp and progressing through the Paragon skills and trees. Players can earn Paragon points by gaining XP once they hit the level cap. They can spend these points across all the Paragon Trees they've unlocked.

To get through these stages, you must regularly participate in the available Shadow activities. The goal is to be one of the best ranking dark clans, and get through the Cycle of Strife in order to eventually face and potentially the Immortals. 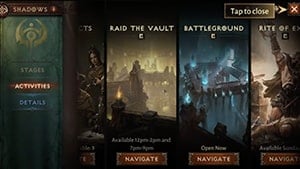 Part of your available endgame activities is to become a Shadow and participate in their exclusive events and activities and make enough progress to eventually face the Immortals. It is one of the more difficult challenges available in the game since you have to reach a certain dark clan ranking within the server before you can progress all the way to the end for a chance to face and potentially overthrow the Immortals, becoming Immortal yourselves. As immortals, you will gain even more exclusive rewards and gain access to even more events.

Immortals can acquire unique rewards during their reign

For more active and multiplayer activities, players can participate in Zone Events, particularly the Ancient Arena to engage in PvP battles that are opened regularly. When in Bilefen, a countdown for the Ancient Arena Battle appears on your side objective bar. Once it is active, a timer starts for the time left that the Battle will remain active. Diablo Immortal Ancient Arena opens up every 3 hours from 10:30 AM to 10:30 PM server time everyday, while open players can enter the Ancient Arena and when the events starts, all players can engage in free-for-all PvP combat. The final reward is gained after opening the chest in the center. You can attempt to open this while players are around, but will need to be uninterrupted while interacting with the chest, otherwise you will need to be the last one standing to ensure you can successfully open the chest on your own.

If you haven't already, go through all the available quests and storylines and then go through their Side Quests as well if you want to grind through them. Going through the regular campaign will ensure you have all features, activities and Locations unlocked for Endgame

As you reach higher levels, you may want to participate in Faction actitivies if you want to gain more valuable rewards since you have a bigger advantage in progressing through the different Faction and Clan activities. As an adventurer you have access to limited rewards and daily activities, but joining a Faction, starting with the Shadows will grant you additional rewards as you and your clan participate. Each faction gains access to exclusive rewards and activities according to their faction. Members of the shadows have  a chance to steal items from the Vault, and ultimately can work their way up to facing the current standing immortals.

Joining the Shadows and progressing through this content is an optional feature in the game. However, as you approach the end of the game or finish the main storyline, it because a great source for extra content, activities and great rewards. Only players level 43 and above can participate and gain a chance to become a shadow. As Shadows, you can choose to work your way up the rankings in a Dark Clan and progress through the available Shadow events, This eventually leads to the Rite of Exile.

If you are already in an existing clan with a substantial number of members, the leader can choose to convert the clan into a Dark Clan to compete in the Shadow War, with the ultimate goal of overthrowing the Immortals. After joining a Dark Clan, you will be able to see all members, their level, role, and Rank as well as the Details including all selected Advantages, the Focus that was selected by the leader, and how many contracts have been completed so far. This will also display who the leader is, total members, XP, and the clan description if any. 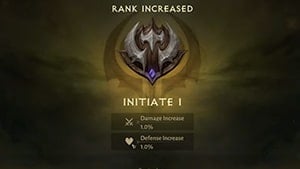 As you participate in events within the clan, your rank will increase. This can be viewed anytime under the tab "My Rank" This page will also display your Rank Reward, Daily Quests and Challenge Quests. Below your current rank will also be your added buffs gained from your current rank Title. The Possible Rank Titles you can receive in a Dark Clan are as follows: 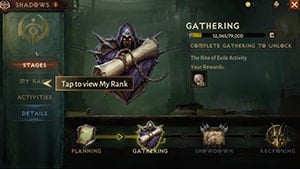 As a shadow in a Dark Clan, you can now participate in Shadow activities that help progress the clan through the different stages of the Cycle of Strife.

Planning is the first stage that occurs during the recruitment process as the Clan starts to grow. The Shadow Faction will need to grow in order to progress to the next stage. Akeba's Signet must be obtained for each recruitment and invitation. Continue to recruit members to the Faction while new members do the same through the Shadow Lottery process until the Clan has grown. This will bring you to the next stage.

Gathering is the farming and grinding stage where members will need to participate in challenges and quests to progress and earn as many Marks during this phase. This is measured against other Shadow Clans. Leaders can track your progress during this phase and do have the power to change your ranks or kick you out of the clan entirely.

This stage commences the face off against the current Immortals. At the initial game release, these Immortals will be run by NPC Immortals until they are replaced by the next set of Immoral players. After this stage, the clans will have to face Immortal players during the Rite of Exile. If the Shadows in the Showdown happen to be the winners in this round against the Immortals, then they have already won and will become the next Immortals. However, in a lot of cases, the Shadows will not win. They do have to continue to earn m Marks and progress until they reach the next stage in the Cycle.

During this Phase, Adventurers can join in without going through the Shadow Loterru and any earned Marks are now buffs for the shadows. The shadows can continue their progress by earning Marks and eventually the shadows should be able to overthrow the immortals if they haven't already.

At the endgame, you likely would've participated in a handful of Bounties. These are refreshed everyday so there are plenty of objectives and activities to go through and experience. Completing them will grant you additional rewards and Bounties are available to all Adventurers to participate in. There are four that are displayed on the Bounty board each day that are available to accept