Elder Rifts in Diablo Immortal are randomly generated dungeons that can be modified for increased variety and rewards with Crest. Using Crests, random modifiers will be added your Rift that can add positive or negative effects to your next run. In return, your next run will greater rewards for the entire party. This is one of two types of Rifts, Challenge Rifts and Elder Rifts.  These challenges and dungeons are unlocked by progressing naturally through the main Questlines until you reach Westmarch. On this page you can find helpful information for the Elder Rift in Diablo Immortal

How to unlock Elder Rifts in Diablo Immortal

In order to gain access to this feature, players must progress through the main story until you speak to Charsi and are naturally taken to participate in your first Elder Rift. She will also teach you about Legendary gems.

The main difference between Elder Rifts and Challenge Rifts is thea ability to plug in Crests in order to modifiy the Rift. All ifyou rare and Legendary Crests will be displayed here with the option to purchase more. Up to 3 Crests can be used at a time. However with legendary crests, this limit increasse to 10. Hover over these crest spaces to view a prompt.

Use when opening an Elder Rift to add a modifer to the Rift. Completing the Elder Rift has a guaranteed chance to yield runes. If an Elder Rift fails to be completed, all Crests used will be refunded to players via mail.

Should you leave an Rift incomplete, the game will return your crest through your messages and you will receive a note with a promp to collect your crest. This message will be titled 'Crest Recovered'

You did not compelte an Elder Rift.. Crests used on incomplete Elder Rifts are returned to you. 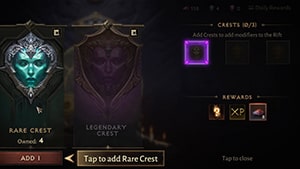 How to get Crests for the Elder Rift

If you navigate to the Hilts Trade in Westmarch, Lieutenant Fizriah will have a few item options for purchase, including a Legendary Crest and a Regular Crest. The Legendary Crest will have a Monthly purchase limit of 1 while the regular crest has a Daily Purchase Limit of 2. You can also speak to JondoMouren, the Crest Merchant to view his shop. He will have an Eternal Legendary Crest in stock. This may require payment in either Eternal Orbs or Platinum. From your inventory, opening up the Crest will prompt you to Visit Rift.

Using Crests, random modifiers will be added to your Rift that can add positive or negative effects to your next run. Moreover, the increased effort yields greater rewards for everyone in the party. Using a Rare Crest adds a modifier to the Rift while using a Legendary Crest adds 2 modifiers to the Rift. The amount of modifiers in a run is based on the amount of Crest, Rare Crest and Legendary Crest used and are stackable. Once you enter the Rift, these Rift Modifiers are displayed at the start. You will also be given a chance at this point to select a Bonus Attribute or skip this step.

Each time you successfully complete a run, you'll receive an Item, Experience and Gold as rewards. You also can get additional rewards if you have used a crest for that run. Using a Rare Crest will guarantee a Rune drop while a Legendary Crest will guarantee Runes and a Legendary Gem for the entire party. The number of Fading Embers, Runes and Legendary Gem are based on the number of Crest you've used for that specific run.

How Do you Enter Elder Rifts?

Once they are unlocked by progressing through the main quest in Diablo Immortal and reaching Westmarch, these can be initiated at anytime from the same location in Westmarch. Interact with the Rift Statue which is also marked as the Challenge Rift Entrance.  to open the Challenge Rift Page Menu.

How to Open an Elder Rift

Once they are unlocked by progressing through the main quest in Diablo Immortal and reaching Westmarch, these can be initiated at anytime from the same location in Westmarch. Interact with the Rift Statue which is also marked as the Elder Rift Entrance to open the Challenge Rift Page Menu.

Once you interact with the Rift Statue in Westmarch, you will have access to the Elder Rift Menu Screen that will have the current leaderboard standings and Rewards. The Elder Rift Menu will look almost Identical to the Challenge Rift menu without the difficulties and progression section. This is instead replaced with the current Crests have been plugged in to modify the Rift. To the other side, it will also dsplay the Daily Challenge rewards, the avatilable and completed difficulties and will give you a chance to view your party or Find a party then finally begin the Challenge Rift 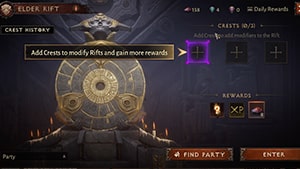 Find a Party in Elder Rift

Much like Challange Rifts, they give you an option to find a party to complete the rift with. Within the Challenge Rift menu, is a section to view your current party or to find a party. These Rifts can also be completed alone if preferred. However with a larger party, more crests can be added to modify the rift.

To complete an Elder Rift, you'll need to defeat hordes of enemies and then kill a randomly generated Rift Guardian Boss within the set time limit to win rewards with your party. You will usually have your objectives displayed to the side of your screen. Clear the objectives and defeat the hordes of enemies as quickly as you can to gain bonuses.