Classes in Diablo Immortal include several fan favorites and the entire roster available in Diablo 3. There are six classes announced for the official game launch, but the Technical Alpha only features four of them, in order to allow for the developers to fine-tune the core classes. Please see Paragon System for details on Paragon Levels

How Many Classes Are There?

There will be at least 6 classes, but only 4 were initially playable in the Technical Alpha. Players can now find all 6 classes, Barbarian, Crusader, Demon Hunter, Wizard, Necromancer, Monk, available during Character Creation.

What Is The Best Class?

All classes are viable for the game, and you can select each based on your playstyle and adapt your Build for performance. During character creation, it now displays some of the Class's unique strengths and combat styles which can be taken into consideration when selecting your initial class. These strengths and combat styles can also be found during the class selection stage.

What are the Class Strengths?

Below are the strengths that are displayed during the introductory stages of Diablo Imortal two. Each Class is displayed with two traits each with only the Crusader holding the Hybrid trait and the only Summoning trait belong to the Necromancer.

Can you Change Classes mid-game?

Unlike previous titles, Diablo Immortal is expected to have more flexibility and freedom when switching classes. You will no longer have to progress at the start when deciding to change your class. Players can now have their progress carry over anytime they switch. This does not apply to class-specific skills and abilities, but will make character creation easier for most players in case someone was unsure about their choice.

Classes are not Gender-locked, and players can opt to be a male or female of any class

Do Classes Have Unique Equipment?

Yes. See Weapons, Armor and Mounts for details on customization options, including Legendaries and Sets. All released Cosmetics will be available for each class.

As darkness returns to Sanctuary, a brave few dare to face this threat. But what fate awaits them in a land forsaken by hope, valor, wisdom, and justice? 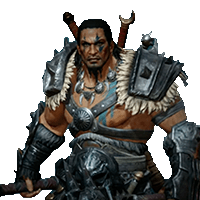 A savage wanderer. Surivivors of the disaster that struck Mount Arreat, Barbarians ue brual attacks to crush any opposition.

Savage warriors who protect their sacred ancestral lands with brutal melee attacks, unleashing their undying rage on the demontic horde.

A wrathful zealot. Armed with their faith, Crusaders vanquish evil wherever they go. dominating the battlefield through sheer purpose.

Unbending champions of faith who rely on holy magic and heavy armor to withstand attacks, while vanquishing demonic foes with blazing fire and blinding light.

A vengeful stalker. Relentless vigilntes that assault from afar, Demon Hunter strike undeterred until their prey is at their mercy.

Relentless vigilantes who wreak vengeance on the demonic horde with an arsenal of arrows, explosives, and mechanisms, while moving constantly out of reach of their foes.

A master of martial arts, Lightnin-fast strikes that pummel enemies with a dizzying array of blows and mobility are the Monk's specialty.

Sacred martial artists who channel divine energy into powerful melee attacks, rapid movement on the battlefield, and wards that protect themselves and their allies. 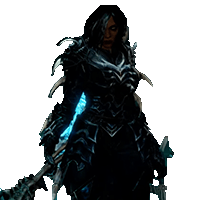 Master of life and death who harvest the power of the dead, tormenting their enemies wth skeletal minions and dark magic.

A living conduit of arcane power. Wizards manipulate arcane forces to strike from a distance, disintegrating their enemies to oblivion.

Renegade spellcasters who channel channel arcane energy into powerful combinations of magic that manipulate and destroy their foes.