Adventurers is a Faction in Diablo Immortal. It the first out of the three available Faction in the game, which goes from Adventurers, Shadows and Immortals. These Factions are features related to Clans, whether players decide to create a clan or join one. This faction directly affects what kind of events or activities and rewards are available to the. Remaining an Adventurer will only give you basic access. Choosing to Switch to either the Shadows or Immortals will give you access to more exclusive events and rewards. This is not necessary for players who wish to remain casual and do not wish to partake in other Faction events.

Adventurers is the default or starting Faction. This is the largest Faction out of the available 3. All players of Diablo Immortal will be considered Adventuerers until they decide to join or create a Clan in order to move up a Faction. Players in this faction can choose to remain an Adventurer if they do not wish to participate in exclusive Shadow events or missions.

As an Adventurer, you are one of the brave heroes tasked with driving back the endless horrors that stalk your world.

One way to do so is by visiting the Bounty Board in Westmarch and seeing who in Sanctuary needs your help the most.

You'll earn bonus rewards for ever 4 bounties that you turn in.

You begin the game as an Adventurer, and can create or join a clan-- a group of other Adventurers who play together. When you are stronger, you may choose to join a faction, like the Shadows or Immortals, which have their own headquarters and offer unique gameplay activities.

The Clans menu is found under the Adventurer Tab. Under this menu, you can view different tabs that will have the details and information on aspects of the Clan starting with the basic Clan tab that will display a clan's members and number as well as the Leader's clan message if the leader has inputted one. If you are not part of a Clan, this menu will display all suggested clans with members close to your current level, how many members there are in the clan and will give you the option to apply or create a Clan.

Brave Adventurer, the protection of Santuary falls to you. Undertake Boutnies to help those in need, earn rewards,a nd eradicate the demons of the Burning Hells!

As an adventurer, you will have access to the regularly released Weekly Bounties. You progress and rewards can be viewed on the Adventurer menu. There will be 8 weekly bounties, and it will display how many you. have accepted and Completed. 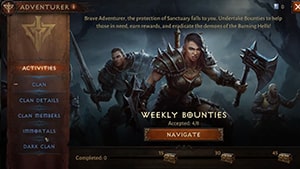 Once you are a part of a Clan, this will display addition menu options such as your Activities, and other Clan tabs such as Clan Details, Clan Members and other options you can view including Immortals and Dark Clan. View the Clan members to view who is the current clan leader, their roles and when they were last online. All Adventurers are sorted into a regular clan. Players must switch factions to join or create a Dark Clan if they choose to. A leader can convert an existing Clan to a Dark Clan with 100 Akeba's Signets. This option is also only available once all members reach level 43 or above.

Become a Dark Clan to compete in the Shadow War, with the ultimate goal of overthrowing the Immortals!

These menu options will not be unlocked until you reach a certain level. This feature is unlocked at level 43. All Clan members must reach level 43 for their clan leader to convert their clan into a Dark Clan. These features are usually aligned with becoming a Shadow with the goal of becoming a part of the Immortals. Once members reach the minimum level, it will give you the leader the option to convert to a Dark Clan if the requirements and materials are obtained and met. From this menu as an Adventurerer, it will also display the current existing number of Dark Clans on the server.

Adventurers can proactively attempt to switch Factions by joining the Shadow Lottery. Joining the Shadows is a commitment for an entire Cycle. As long as the current Immortal stays in power, you will remain a Shadow. Joining other factions will expand your menu and give you more event options, rewards, activities, and other ways to participate in PvP battles as a Clan. For more information on Shadows, click here.